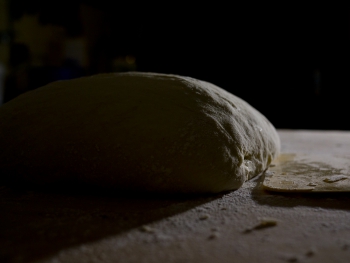 Jeroen van Wisse bakes and delivers bread from his home. He bakes slow-fermented, mostly organic sourdough bread which he delivers to customers in and around Rotterdam.

Jeroen's breads get lots of time to develop their flavors. Fermentation lasts up to twenty-four hours, sometimes even more. After fermentation, the bread is baked at high temperature, giving it a hard, crunchy crust. The flavor of the bread is rich, 'old-fashioned' and the crumb is irregular, with pockets of air varying in size. The whole wheat bread is made of 100% whole weat and it is a bit more compact than the other breads.

Jeroen's bread is delivered once a week on Saturday (occasionally also on Friday) in and around Rotterdam. Our baking capacity is still rather limited, which is why ordering early on during the week is recommended. Ordering can be done via our contact form. Should we be sold out for the week when you place your order, we will inform you immediately.

Every week we list the items that are available for ordering that week. The list can be found here.

Jeroen can also be found on Facebook, which is where Jeroen Bakt Brood ('Jeroen Bakes Bread') started in 2014.